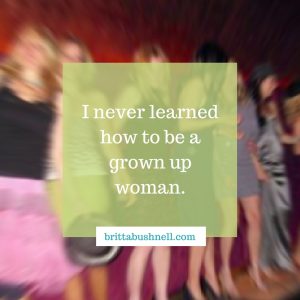 I don’t think I ever really learned how to be a grown up woman…you know, like those women who know how to dress, how to do their hair and makeup, how to do small talk, that sort of thing. No matter what sort of business-like gathering of women I attend I seem to stick out as the unrefined one as if I have a sticker on my head that reads, “grew up swearing, lived in Hawaii where dressing up means fancy flip flops, and currently lives in a cabin in Topanga.” You know what I mean?

Makes me think of the time I went to the Holiday Party of a business group my husband was a part of where the theme was “Sex in the City” and the instruction was “come as your favorite character.” I took that to heart and channeling my inner Carrie, showed up in a bright pink tutu skirt and a blonde wig. Nearly everyone else heard the same instruction and understood it to mean, wear a sophisticated cocktail dress!

Where were these instructions taught? How come I missed them? How did I miss “Sex in the City–come as your favorite character” meant sophisticated (and mostly black) cocktail dress?! Is this what one learns reading Vogue, Cosmo, and I don’t even know what other magazines?

Maybe I was supposed to learn refinement in high school or college. Sure, I was a high school cheerleader and, not only was I in a sorority during my college years, I was the president. But let’s take a look at these because I was not selected for either due to my refinement!

I went to high school in Hawaii, so right there the definition of refinement has completely different meaning and tends to involve a surfboard, a bikini, and the ability to pronounce Hawaiian words with ease. I was skilled in only one of the three. But as to cheerleading…If there was something I could be involved in, I was. I joined the squad because I was joiner and rather LOUD. I could lead call and response chants without needing the aid of a megaphone. I wasn’t a particularly coordinated dancer and I’m still rather klutzy, but LOUD? I had that down and still do. This might be a side effect of having seven siblings.

And the sorority president…well, I rushed as a freshman in college at a rather conservatively leaning university and did not get on-campus housing. How was I going to find my people? Fortunately for me, I went into rush without many preconceived ideas about which sorority was the “best” or “coolest.” I was pretty open to following my instinct. A friend told me the best method for figuring out which one would be right for you was to ask yourself while at a rush party, “would I be comfortable waking up around these women with no makeup and be completely yourself?” Since I didn’t wear much makeup and didn’t know how to be anyone else, this was rather important not just upon waking in the morning, but all the time. I was lucky and had my pick of sorority. I found women with whom I felt comfortable being silly, odd, and irreverent. In other words, I found my people and they were not one of THE sororities on campus. I guess because they were my people and equally comfortable in their own oddity, they made me president. I didn’t run for office, I was slated, which is sort of where a committee picks who they think should be in each position and the chapter votes on the whole thing. No one got to complain that the newly slated president didn’t shave her legs and was a “professional clown” on weekends, among other missing refinements! Clearly, I didn’t learn refinement from either my high school nor my college experiences. I didn’t learn it in my years as a yoga instructor or yoga studio manager either; I worked barefooted and in yoga clothes!

Working in birth hasn’t really upped my finesse game either. We’re a rather casual and crunchy bunch in general, but even there I have a tendency to find myself breaking established norms. I was the one at the annual awards banquet who dropped to the floor in her “prom dress” and did a mock labor contraction! Yep…so refined!

How does one learn the language of refinement in the middle of life?

Or, do we really need to? Yes, I was the first to dance on the tables at that Sex in the City party, but I was not the last. In the end, I think others had a pretty good time with my pink tutu and blonde wig, even though I was so out of my skin for the first hour or two and felt deeply relieved when we left.

Clearly, refinement isn’t my superpower! Edgy, courageous, goofy, and a willingness to break out of the norms of completely respectable behavior–that’s a bit closer.
The clash between my introvert (who just wants to blend in) and my extrovert (who loves to be the life of the party and to be seen) is horribly strong!

AND…There are times I have to play at the “Business Woman Table.” If my career moves in the direction I desire, that will happen more and more. So what’s an oddball like me to do? At those times, I will ask my energetic extrovert to show up and play, regardless of the looks, questions, or discomfort of my introverted side. I pledge to focus on connection with others and with my own authenticity in the midst of the discomfort. I will make it a practice. Personal growth shows up in so many ways.

That…and I’m going to go shopping with a friend who knows how to dress the part! Don’t worry, I will always add something funky or a quirky piece of jewelry; something will always not quite work.

I don’t think fitting in will ever be my strength.

And maybe each woman has her own unique flavor. My particular flavor is a bit irreverent: I swear, I wear my hair in a messy bun all. the. time. I wear lots of color when others wear black, I drop to the floor in mock contractions whenever I feel called, and I have a panache for reading “costume” into almost any dress code! Maybe it isn’t that I need to learn how to be more refined. Maybe, I need to work on my definition of what it means to be an adult woman. For some that includes a flavor of refinement. For others, like me, not so much.

Maybe being an adult woman means stocking our pantry boldly with all sorts of spices and flavoring our lives in exactly the way we feel called to do so! Time to get cooking!

Posted in self-care
← Childbirth, Hurricanes, and Faith: Taking Refuge in the UnknownKids, Parents, and Too Many Holiday Presents →