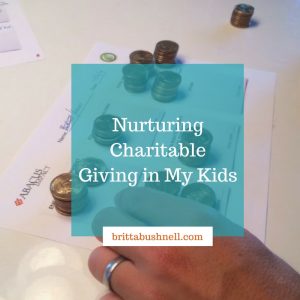 When I thought about my kids before they were even born, I had ideas, like most moms-to-be that my kids would be good kids, loving and caring. I knew I wanted them to be warm and be able to feel deeply into the lives of those less fortunate. I wanted my kids to want to be do-ers and givers. My husband and I wanted our kids to be compassionate and charitable.

Like all moms, I had idealized notions of both motherhood and my future children. The dreams were easy; it was the manifestation into reality that proved the tougher challenge. How do you teach children to be giving?

Here is my list of what helps instill charitable habits in our children.

Kids start early seeing the suffering of those smaller, weaker, and in need of our help. I remember my not yet one-year-old crushed a pill bug/roly-poly with his little fingers in front of his older brother who was maybe just over three-years-old. My older son howled in pain for the roly-poly, now reduced to mush. He was nearly traumatized by the ruthless and insensitive behavior of his little brother. His pain and anger led him to become the family roly-poly crossing guard and to this day (well into his teens) he points out roly-polys that have put themselves in harm’s way on the path that leads us from the front door to the car, making sure no one accidentally steps on one while rushing to the car en route to morning carpool pick up.

This may not seem like it relates to developing charitable behaviors, but I believe that was a seed to the very plant of charity and compassion I wished to nurture in my boys. It would have been easy to laugh off his initial concern for the small little hard-shelled bug as nothing more than a little kid’s fancy. I chose to see it as an expression of his compassion and compassion was (and is) an emotion I wish to see cultivated. After that afternoon in our veggie garden, I chose to take seriously every roly-poly crossing guard action my son made. When he stood on the path pointing out potential victims of my too-large shoes, I stepped carefully and slowly, even when we were late.

2. Let kids give, even when you disagree with their choices

There are many of us who don’t want to give to panhandlers out of principle, choosing instead to donate to local shelters, halfway houses, and other charities designed to help in organized and thoughtful ways. Kids, however, see people on the streets and feel either repulsed or drawn in by their suffering. Young kids often have questions and want to know why that person looks (and maybe smells) like THAT. They crave understanding. When our kids asked these questions they almost always followed it up with a desire to do something to help. Even as little kids they wanted to drop some money into the cup or hat, hoping to make a difference. We not only let them, we encouraged them to do so. These are the beginning urges toward charitable giving.

At the main intersection of our hometown, there are almost always people holding signs requesting help. You know the ones: They walk up and down the line of stopped cars at long lights, painful to look at. Since our kids were really little they have seen people struggling and asking for help in this way. I started carrying granola bars, protein bars, bags of nuts, and other quick power-punching snacks, not just for my hungry cranky kids who in a pinch might need something to tide them over, but so I would always have something to give out at the stoplight when my kids had the desire to do something. I would ask them, “I have some nuts and protein bars here. Do you think we should give them some of those?” Again, my main purpose was to create the feeling of doing something and nurturing the charitable giving impulse.

From the time our kids were old enough to receive an allowance, they received it in three different chunks. My husband is a financial planner and works with people and their relationship to money as a core aspect of his career, he even wrote a book about it. Working with people around their money has taught him a lot about the importance of developing a healthy, responsible relationship to money.

Here is what we did:

The amount of allowance was determined by our child’s age. At 3 our son got $3 a week, at 5 he got $5 and so on, now at 14 and 12 they get $14 and $12 respectively. This allowance was divided equally into three different jars; spending, savings, and giving. Our boys were encouraged to spend the money in the Spending Jar on whatever they wanted, savings was not allowed to be touched and earned interest (that’s for a different blog), and giving was to be given away as they wanted. Our boys’ Giving Jar would be pulled out when they had a “jump rope for heart health” event at school, or given to World Wildlife Federation when my older son wanted to save the polar bears, his favorite animal. From an early age we, as a family, were very involved in one particular charity due to our older son’s health condition. Each year when the Walk would come around, our younger son would get his Giving Jar and want to donate all of it to the Walk, hoping it would help his brother. Our boys have had complete control over how the money in their Giving Jar is allocated and it has been deeply touching to see just how they choose to do so. It has had the added bonus of teaching me more about my boys and what is important to them.

There are not as many organized volunteer opportunities for kids as I wish there were. It took a while for my husband to find a homeless shelter that allowed kids to be involved in helping cook a meal, which we did, but there are lots of other ways, even small ways, to volunteer. Eliminating hunger is an important value for my husband so cooking a meal for the homeless was what led him to find an organized way to put action behind his compassion. We’ve also done a number of walks and while this may not be volunteering exactly, I can say that as a family who has been walking and raising money toward a cure to my son’s disease, when friends show up to our walk, it makes a difference not just to the disease, but to my son who sees all his friends supporting him and his efforts.

Lastly, we make volunteering a part of our annual holiday tradition, spending the morning of Christmas Eve every year giving away hygiene kits, blankets, toys, and warm coats to those living on the streets in downtown Los Angeles. We have been a part of this event since the kids were too young to even go down there as babes in arms. But since the age of five they have been every year and having it a set tradition since before they can remember makes it an unquestioned and highly-anticipated part of our holidays.

This one is pretty obvious, but not to be overlooked either. Our kids do what we do, not what we tell them to do. For my husband and me, being charitable both with our money and our time is important. We believe in giving away a significant amount of our income and doing what we can to give to causes we believe in. This isn’t something we’ve done as a show for our kids; it is built into our values. That said, we do let our kids know when we are doing something for others, be it volunteering, going to a fundraiser, or sending a check. As much as possible we live this part of our lives visibly for our kids to see, even for things like supporting the fundraising events for the public elementary school they attended.

6. Include them in your family’s charitable giving Now that our kids are a bit older, we include them in discussions and decisions about how we allocate the money we give away as a family. My husband uses some very clever ways to help families figure out where they wish to give when there are many different people helping to make those decisions. Just this past weekend we sat down as a family over breakfast to make decisions about our end-of-year-giving.

My husband brought home 400 coins, giving each of us a stack of 100. We brainstormed all the different areas where we would like to make a difference in the world and at home. Each of us had a paper in front of us with several different general categories. We divided up our 100 coins on our individual paper, feeling into how we wanted our ¼ of the family charitable money allocated according to our particular beliefs.

Once we had our personal stacks, we then subdivided the categories into actual charities and put the subdivided categories in the center of the table where each of us got to take the coins from the area of our personal paper, say “Human Rights” and divide those coins into specific charities/areas where we would like our money to go.

In the end the number of coins in each box represented the percentage of the total 400 coins and the percentage that represented of our total charitable amount to give away. For example, if one charity had 50 coins in the square at the end, they would get 1/8th of our total amount to be given away. Each of us had the same power to decide where and to whom we give. Each of us also left out ten coins, keeping 10% of our money for more impulse giving throughout the year.

Does this all work and make a difference? Are our adolescent boys perfect? No, but neither are we as parents or as people. We’re fallible, all of us, but we’re doing the best we can and I do believe our kids are growing into adults who value being charitable…we’re not completely there! But we are on our way.

My hope is that as all of us help nurture the charitable spirit in our children the world will be a more loving and compassionate place for everyone. Let me know what works for you and your family. I’m still learning and like all moms, welcome new, good ideas on this path toward raising children into healthy adults.